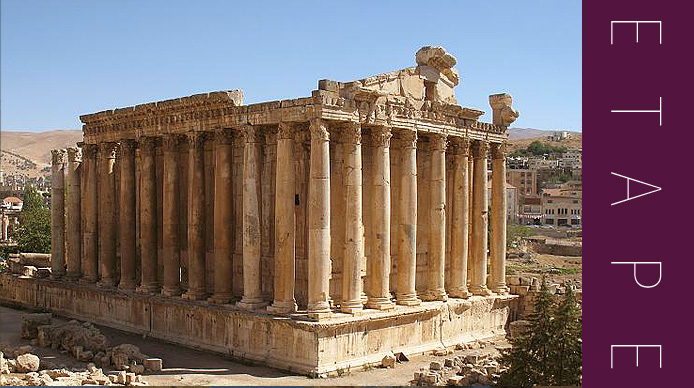 Located about forty kilometres away from the town of Zahlé, Baalbek, the blossoming IIIrd century BC Phoenician town, renamed Héliopolis in Roman times, is an inmissable landmark in the region.
The Greco-Roman site that proudly overlooks the whole northern part of the Bekaa plain is classified UNESCO world heritage. A national high point where you can discover the impressive Temple of Bacchus – the largest in the Roman world – with its sumptuous 22 metre columns. Right next to it, Jupiter’s Temple with its six columns continues to push the limits of grandiose Antique architecture; and alongside it, the courtyard of sacrifices, at over 15 000 sqm, is the summit of the visit, so monumental it is. Further along, soft curved lines take over again in the cosy and tightly arranged Temple of Venus, which stands in stark contrast to the monumental proportions of this complex that has stood there for milleniums.

More recently and really only since 1955, has the town played host to a very nice festival celebrating culture during the months of July and August in the city’s Greco-Roman ruins. The celebrations tend to focus on theatre, ballet and music in all its forms, from Jazz to Rock via classical. Baalbeck festival.