Beirut, the city that never sleeps 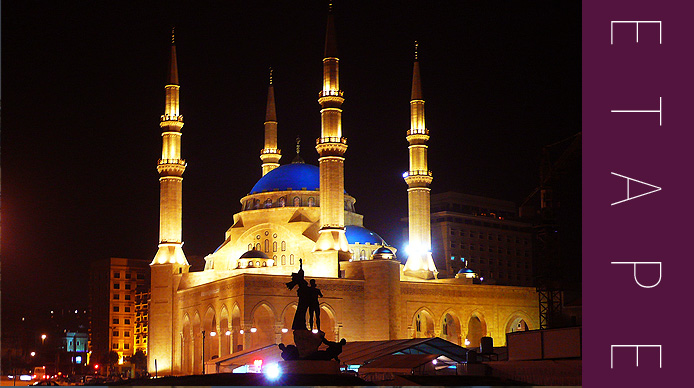 The city never seems to sleep… ! The city that is still called the Paris of the Middle-East on occasion has, evidently, taken a little piece from each of the great capitals in the world to make it what it is today: a place with thousands of lights and a strong personality. A patchwork that reinvents itself as history goes on and also to suit its moods with great shopping, design, architecture, and culture; a picture to the splendid Maison Jaune that will, in 2014, become Beit Beirut. For the time being, dive into the Lebanese frenziness, the mad traffic that penetrates each alley, to fully experience the city’s flamboyance and polish. Enjoy a chic coffee break in the hippest city hangouts or some mohalabieh from a street stall – in Beirut, everything goes and all tastes are catered for.

Located in the heart of Beirut’s historical quarter – Aschrafiyeh – the Sursock palace is one of the rare historical monuments not to have been damaged by the fighting during the war. Built between 1850 and 1860 by Moussa Sursock for his wife Lady Sursock, the palace is currently inhabited by his granddaughter, who is quite determined to ensure the soul of the anglo-lebanese family lives on. Aside from its historical aspects and stateliness, the building also holds a stunning art collection to be discovered in the lobbies and lounges. The magnificent gardens are also open to visitors.
Sursock Palace, rue Sursock, Beirut

The Museum of Soap
A commendable private initiative to showcase the ancestral craft that is the production of olive oil soap. A small circuit explains the different steps that form part of this long tradition, which is 3000 years old. Olive oil, bay laurel oil, soda for the mixture, then cooking time and the never-ending drying time, all form part of the process that gives olive oil soap its reputation throughout the world.
The Olive Oil Soap Museum, El Moutran Street, Saida, Beirut

Unlike many new builds, the Mövenpick in Beirut does not spoil the view to the sea. Its clever architecture has instead given it pride of place letting everyone take it in and enjoy the view of the blue horizon as well! Its high quality of service, renowned internationally, aside, the Mövenpick also happens to be one of the best restaurants in the Lebanese capital to feast on all that this small middle-eastern country has to offer: fattoush, grilled meat kebabs, tabbouleh and the delicious mohalabieh (a sort of milk cream with rose water and pistachios). The menu is a true testament to the level of refinement you would expect from a cuisine whose reputation reached international levels long ago already.
Mövenpick Hotel, avenue du General de Gaulle, Raoucheh 2038 6908, Beirut, www.moevenpick-hotels.com

Domaine des Tourelles
Located at the heart of the Achrafieh quarter, don’t forget to stop by the newly designed shop of the Tourelles Estate to pick up one last case of Brou de Noix or 2007 Marquis de Beys, after your trip to the Bekaa region. The store organises tastings throughout the week to showcase the different personalities of the estate’s wines. A lovely idea packaged in a very nice box. Domaine des Tourelles Shop, 250 rue Monnot, Achrafieh, Beirut, Tel.: 961 1 330 114

Assyla
This shop, which carries a range of traditional clothing with a modern day take on them, owes its name to two people. The designers Najwa Sinno and Hareh Haidar use only the most beautiful materials and fabrics for their collection of kaftans and djellabas that moonlight as exquisite city wear or fairytale dresses. The shop is located at the heart of the Saifi Village, an unmissable destination for an enlightened shopping experience. Assyla, rue Riad Solh, Saifi Village, Beirut, Tel.: 961 1 970 333.

Craftmen from Lebanon and the Orient

Still in Saifi Village, the Craftsmen from Lebanon and the Orient boutique is a real gold mine for any amateur of beautiful craft. Opened in the 1980s, the place is oozing with interior design pieces, clothing, artisanal objects whose semi-traditional/modernist shapes would make them fit nicely in any house across the world. A magical yet dangerous place for anyone who likes to travel light. Artisans du Liban et d’Orient, rue Said Akl, Saifi Village, Beirut.

Johnny Farah
Rigour and simplicity are the two cardinal rules for Johnny Farah’s collections. Rules he was taught in Scandinavia where he use to live and that still influence his work, that is both neat and worthy of the greatest names in the genre. Handbags or travel bags, ipad, laptop or mp3 cases, belts and other leather accessories, Farah’s designs are esthetic yet practical. Beirut and New York are the only two cities where you’ll be able to stock up on his pieces. Johnny Farah, rue Said Akl, Saifi Village, Beirut, Tel.: 961 1 974 808, www.johnnyfarah.com

Karim Bekdache
Karim Bekdache is an admirer of shapes. An architect by training, he specialises in conceiving and creating living spaces for private clients as well as in public sector projects. Driven by his passion, he has opened a space that is entirely dedicated to furniture. The 40s, the 50s, the 60s and more – pieces from each era pass through his hands so long as the chair, seat or table still has its soul. With a few alterations (new structure, wood repair, fabric change..), each object is reborn and put back into the shop for the greatest joy of our lounges.
Karim Bekdache, rue de Madrid, Mar Mikhael, Beirut, Tel.: 961 1 566 323, www.karimbekdache.com

Papeterie Papercup
Art, architecture or cooking books as well as magazine from all over the world, the Papercup bookshop is filled from floor to ceiling with an incredibly comprehensive selection. And since its owner spent a good few years on the long streets of New York, guests and other curious passers-by receive a warm welcome; with a selection of drinks and cakes she will have made herself. Papercup, rue Pharaon, Mar Mikhael, Beirut, Tel.: 961 1 443 083, www.papercupstore.com

Agial Art Gallery
Located right at the heart of the Hamra quarter, just a hop away from the American University of Beirut, the Agial gallery is the absolute destination for anyone interested in finding out about the vivacity of modern art in the Middle-East. Artists from Syria, Lebanon, Iraq, as well as Bahreïn or Sudan, are welcomed here and can show their excellent pieces, often loaded with meaning about the contemporary world. Among the pieces, some by Nabil Nahas, Alain Tasso and Tagreed Darghouth.
Agial Art Gallery, 63 rue Abdel Aziz, Beirut, Tel.: 961 3 634 244, www.agialart.com

A cup of tea at the Gray
The unmissable chic and elegant destination in the capital, the Hotel Gray is also the perfect stop at the end of a long day of exploring Beirut. Tea Time at the Gray is more than just a stop; it’s a delicious one where form and content blend into each other. A delightful tea list is complemented by an impressive pastry selection that includes the finest creations from all over the world, and best of all, fantastic service. Charm and discretion epitomise the Gray hotel that offers a well deserved pause in a luxurious and beautifully designed setting. Gray Hotel, Martyrs’ Square, Central Beirut District – Beirut, www.campbellgrayhotels.com

Café de Prague
With its simple yet efficient decor just two steps away from the American university, the Café de Prague attracts an overachingly young and bubbly clientèle and is a hybrid between a café, a restaurant, a bar and a nightclub. It is one of the most in vogue destinations in the city in recent years. The tone is voluble and the atmosphere light at any hour of the day. Add to that a touch of good international music and you’ll soon understand the attraction. Café de Prague, rue Makdissi, Hamra, Beirut.

Music Hall
Camille, Birkin, the Têtes Raides and Rachid Taha… they each figure on the long list of celebrities that have performed on the stage of Beirut’s Music Hall. Opened in the 1960s, the Music Hall’s concert venue has been witness to the greatest name of the Middle-Eastern and French scene. It is not surprising then to see how much the place is loved by the city’s residents who all flock here to see their favourite artists perform, discover new talents and of course have a good dance to all musics from salsa to trance, trip-hop to soul. An eclectic mix of genres that shouldn’t be missed under any circumstance. Advance booking advised. Music Hall, Address Starco Center, rue Omar Daouk, Downtown Beirut, +961 1 371 236, www.themusichall.com