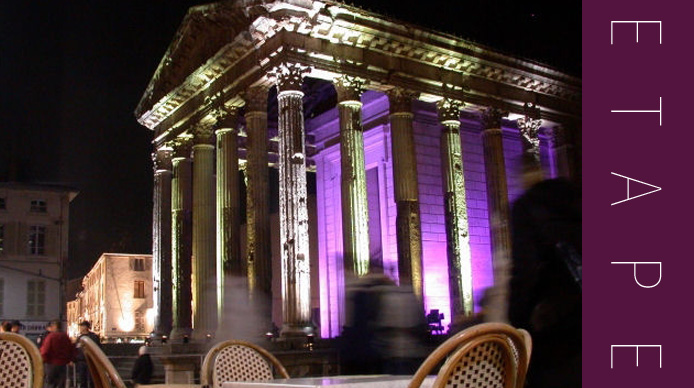 To come to Vienne is to be conquered. In the time of Augustus, Vienne, its vines and wine surrendered to the Romans. An occupation that has left an invaluable Gallo-Roman legacy made up of mosaics, temples and sculptures all miraculously well preserved.

With the Rhone River at the forefront, Vienne, a city of Art and History, is a culturally rich stop, convivial and gastronomic.

Museum and archaeological site of Saint-Romain-en-Gal. On the right bank of the Rhone River, the site covers several hectares and contains a Roman city from the Ist and IIIrd centuries AD. Restored in 1967, it reveals Roman roads and rich villas including the famous “Villa of the Ocean Gods” and the “Five mosaic villa”. A large museum, all glass and light, was added in 1996 to house the precious collections and mosaics. www.musees-gallo-romains.com

Allobroges Estate. Adjoining the site, recalling the writings of Pliny the Elder and the naturalist Apicius, 3000 square meters have been developed with an antique vineyard, a botanical garden and pottery ovens as they existed at the time.

The Antique theatre. Built around 40 to 50 BC in the centre of the town, the Roman theatre was uncovered at the beginning of the XXth century. Having been renovated, the theatre has regained its primary function with shows and events.

Former Saint Maurice cathedral. In the IVth century, the first Christian communities settled on the site of the cathedral. The current building of Roman style enclosed within a gothic cathedral was erected between the end of the XIth century and the beginning of the XVIth century.

Vienne Jazz Festival.Every June, the director of the festival puts together a breathtaking programme with world-famous Jazz musicians. The theme of the 2012 edition was « cords ». The whole city lives to the rythm of jazz. For further information : www.jazzavienne.com

The great market. Every Saturday, by rain or high wind, the centre of town is taken over by more than 400 market stalls, local producers and street peddlers. Flowers, fruit, vegetables.. Very colourful.

The Pyramid. When you know that he learnt his trade from the great Fernand Point, with two Michelin macaroons, the cuisine of Patrick Henriroux could only be remarkable. It is indeed, Patrick is at the summit of his art. The decor, which remains very sober, brings out the plate on the table, the true work of art. On the menu, seasonal produce with spices, tonka beans, the finest cocoa, curcuma emulsion, grape juice. The market menu is served at lunchtime. Make sure you leave some room for dessert. Chocolate, fruit, or other preparations, everything is delicious. A Relais & Châteaux establishment.

Jeremy Revel, a little genius, started with just 10 euros in his pocket. Today, he is the celebrated best young chef and on first name terms with the star chefs. His cuisine, just sophisticated enough, explodes with flavours of heirloom flowers and vegetables in a young and relaxed setting. Jérémy suggests two menus to choose from “For my grandmother” and “For my grandfather”. We raise our glasses of Condrieu to the memory of his grandparents whose dishes have been revisited and jazzed up. 14 rue Henri Jacquier. Tel.: +33 4 74 78 01 43 www.leverreenlair.com

L’Auberge’ In. Jérémy Revel’s new restaurant is « World cuisine ». Tapas are on top of the menu but the menu is still inspired by the Bouchons Lyonnais with a fois gras cuit prepared in the traditional way. 39 bis rue Victor Hugo. Tel.: +33 4 74 53 00 00

Le Cellier. Locals from Vienne and regulars like to meet at Maurice Verrier’s, “wine and spirits merchant” at the end of the day to taste his wine and talk. A small shop but a large choice and a very nice selection of wines from the northern part of the Côte du Rhône and from Vienne. 50 rue Joseph Brenier. Tel.: +33 4 74 85 40 81