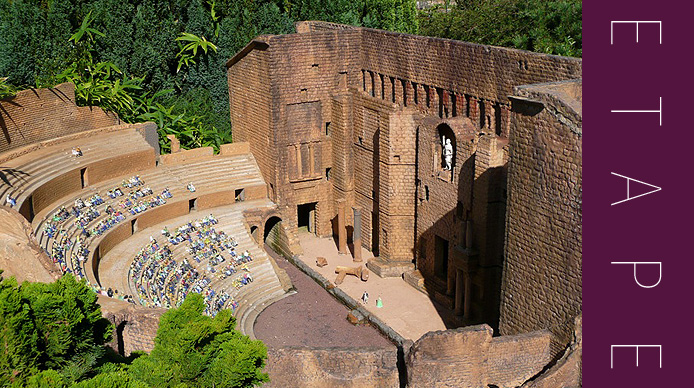 Founded by veterans of Cesar’s Roman Legion in 40-30 BC, the etymology of its name is thought to come from Arausio, a place linked to the river below.  In the Middle Ages, under Charlemagne, Orange became a county, then from the XIIth to XVIIIth centuries, a principality. It is in 1544 that Prince William Ist founded the Orange-Nassau household, a Dutch household. In 1713, the principality is terminated and attached to France under the Treaty of Utrecht. The Nassau family, which today rules the Netherlands, to this day retain the title of “Prince of Orange”.

The Roman origins of the city of Orange are especially visible in two edifices that were erected at the beginning of the Christian era: the Antique theatre and the Arc of Triumph.

The Antique theatre. It is the best conserved stone theatre in the western Roman world. Louis XIV would refer to “the most beautiful great wall in his kingdom”. The impressive wall of the theatre stands 103 metres long and 37 metres high. The golden scene decorated with stucco and mosaics is surmounted by a statue of Emperor Augustus. The tiered seating arranged in an arc of circle against the Saint-Eutrope hill can seat over 9000 spectators. A performance venue in Roman times, the theatre was converted into housing in the Middle Ages and only restored to its primary purpose in contemporary times.www.theatre-antique.com

The Chorégies. From 1902 the various organised events in the town take the name of Chorégies and become an annual occurrence. A year later, Sarah Bernhardt takes the stage for the role of Racine’s Phaedra. A festival of lyrical art, opera, lyrical concerts, symphonic concerts that takes place every year on the stage of the Antique theatre. Barbara Hendrix, Placido Domingo, Roberto Alagna… A prestigious programme that draws music lovers from all over the world every summer. www.choregies.com

The Arc of Triumph. An honorary passageway, it marked the limit between the world of the dead and that of the antique city. Dedicated to the veterans of the IInd gallic legion and to Tiberius, it symbolises the triumph of Rome and its supremacy. An exceptional example of Roman art in the Provence.

Cathedral of Our Lady of Nazareth and All Saint. It was consecrated in 1208 in the presence of Prince William of Baux.

The museum of Art and History. Opposite the Antique Theatre, in a private residence from the XVIIth century, there is a section dedicated to the history of Orange, from prehistory to present days.

The Place aux Herbes. Located just a few steps from the Antique theatre, a small shaded square with a large plane tree, ideal to quietly enjoy the warmer hours of the day.

The Palais des Vins. Created on the initiative of 150 independent winemakers, the cellar offers a large selection of wines from the Rhone Valley to taste and to buy. Open Monday to Saturday. Route nationale N° 7. Tel.: +33 4 90 11 50 02

Augustus’ Cave. A restaurant dug up in the enclosure of the Antique theatre that was inaugurated by Roberto Alagna and Georges Clooney. With such a patronage, success is a given and the Cave is always full. During the Chorégies, it is the meeting place of all the celebrities. Throughout the year, the owner Fadil Nergui ensures the atmosphere reigns high and organises themed evenings, jazz nights and a cuisine that is perfectly in tune. 35 Montée des Princes d’Orange. Tel.: +33 4 90 60 22 54.

Justin de Provence. A typical ‘Provence’ bed and breakfast at the heart of a vineyard. 4 cosy rooms with four poster beds that look over the garden. The freshness of the pool, a small bistro with its zinc bar, a drawing room with a large chimney… What else do you need to be happy? Nothing. Chemin du Mercadier. Tel.: +33 4 90 69 57 94 www.justin-de-provence.com

Pâtisserie Didier Carpentier. The Augustines and the Sablé du Théâtre, chocolates with the effigy of Emperor Augustus. 9 rue Pourtoules.