AVIGNON, ON THE BRIDGE 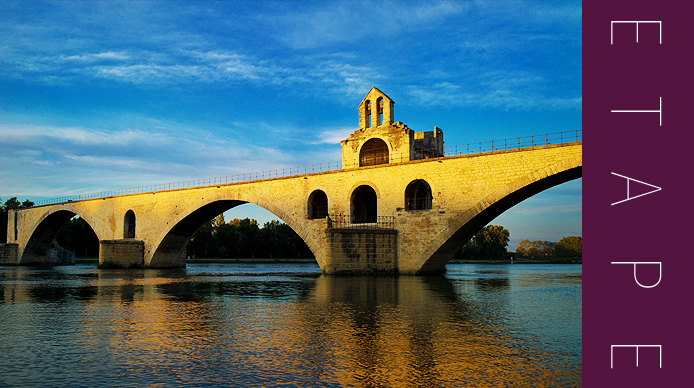 On the bridge of Avignon.. .We all dance there, we all dance there … But what the song doesn’t say is that although people did dance there, it was in fact UNDER the bridge by the Island of Barthelasse. With its four arches that surges over the Rhône River, the Roman bridge of Saint Bénezet remains one of the symbols of the town. It is, as are the Palais des Papes, the Palace square and a section of the fortifications, classified UNESCO World Heritage.

7 popes and 7 churches, 7 Confraternities of Penitents and as many chapels, 5 kilometres of fortifications that were originally pierced by 7 doors, Avignon seat of the Popes and capital of Christianity in the XIVth century could rightly level with Rome, a city that only has 7 hills!

The Palais des Papes. A palace to be reckoned with. One only starts to measure its grandeur by walking round its high walls and fortifications. Severe and seductive at the same time, the largest Gothic palace in Europe was built in less than 20 years in the XIVth century by Popes Benedict XII and Clement VI. Powerful fortress and refined palace, it reflects the differences in taste between the two popes. Aside from the ceremonial rooms, the cloister, Matteo Giovanetti’s frescoes in papal private apartments and the chapels of St John and St Martial are all of considerable importance.

High place for the Avignon festival in August, this town is a true cultural centre throughout the year and organises temporary exhibitions, themed visits and concerts.

The bottleshop at the Palais des Papes. Avignon claims its title of Capital of the Côtes-du-Rhône. A showcase for AOP wines, the redesigned shop in one the palace’s artillery rooms offers guided tastings to its visitors and sells carefully selected wines. Fine wine collectors should look out for the special blend “Pont d’Avignon”, a Côte du Rhône in the three colours and the Popes blend for which each Pope has a limited edition wine. Open every day www.avignon-bouteille.com

The Popes vine. The view atop of the Rochers des Doms, cradle of the city, since converted into a garden, is breathtaking. Overlooking the Palais des Papes, a plot of Côtes du Rhône has been planted with black and white Grenache, as well as viognier and syrah grapes. It is maintained by Les Compagnons du Ban des Vendanges, as a place of memory in honour of the Pope. Tel.: +33 4 90 82 65 11.

Walking around. In the old town, especially in the Vernet quarter, rue St Agricol, rue de la Petite Fusterie and place de Grillon to discover the beautiful town houses, the art galleries and the antiquarians. A stop at the Place de la Comédie is in order to remind oneself that it was there that in the XVIIth century, Molière came to settle with his company and trestles and that under the 1st Empire, Marshall Brune was assassinated.

Petit Palais museum. The palace of Cardinal Béranger was the Episcopal seat of Benedict XII in 1335 also holds an impressive collection of paintings by early Italian painters such as Botticelli, Carpacio as well as the pictures and sculptures in the Avignon school. Place du Palais des Papes. Tel.: +33 4 90 86 44 58

The Lambert Collection. The XVIIIth century Hôtel de Gramont has hosted the contemporary art collection of the art dealer Yvon Lambert since 2000. An exceptional ensemble, from conceptual to minimalist as well as figurative, with works by Combas, Miquel Barcelo, Basquiat… 5 rue Violette. Tel.: +33 4  90 14 56 20

The Avignon festival. Founded in 1947 by Jean Vilar, famous the world over, it is the oldest and most famous French festival. It is in the Cour d’Honneur of the Palace that the Festival d’Avignon began with theatrical representations and creations, it has since moved into cloisters, chapels and colleges. The city lives at the rythm of the festival… And its heart continues to beat for Gérard Philipe and Jean Vilar. From July 7-28. www.festival-avignon.com

La Mirande. We are under its spell! It is THE place to go to in Avignon to enjoy a peaceful stay in an exquisitely tasteful decor. Gentle, sophisticated with a touch of vintage, La Mirande, an XVIIIth century property at the foot of the Palais des Papes, converted into a hotel. The service is the height of perfection and the restaurant highly renowned. 4 Place de l’Amirande Tel.: +33 4 9014 20 20 www.la-mirande.fr

Le Grand Café. Alongside the art house cinema, Utopia, this gastropub is very trendy with a touch of the past and has taken over the old XIXth century manufacture. “To my grandfather”, “To my grandmother”, the owner Jean Marc Augier suggests menus that have been put together to honour the older generation. You’ll remember it for a long time. Rue Escalier St Anne. Tel.: +33 4 90 86 86 77 www.legrandcafe-restaurant.fr

Le Moutardier du Pape. In a nice setting, across from the Palais des Papes, this is the place to come and enjoy some of chef Guillaume Tavola’s exquisite dishes, including a foie gras with an orange compote with spices that bring out perfect flavours. 15 place du Palais. Tel.: +33 4 90 85 34 76

Table Hiely Lucullus. Established in 1938, it is the oldest and most venerated restaurant in the town. In a Majorelle inspired decor, black truffle, lobster, and provencal feet and packets are always on the menu and highly appreciated. 5 rue de la République. Tel.: +33 4 90 86 17 07 www.hiely-lucullus.com

Les Halles. The region’s small producers can be found here with all the fresh vegetables you need to prepare a delicious ratatouille. Open from Tuesday to Sunday 06.00 am to 13.30 pm.

La Petite Cuisine des Halles. Every Saturday from 11.00 to 13.00 (except in August), the chefs from Avignon cook up recipes and a menu with produce chosen at the Halles in front of a live audience. www.avignon-leshalles.com

Péchés Gourmands Papalines, fine chocolate and oregano liquor that are the specialty of Avignon but also the candied fruit from Apt, nougats, calissons and berlingots from Carpentras… All the sweets from Provence to satisfy our greediness. 22 Rue de la République. Tel.: +33 4 90 86 87 14