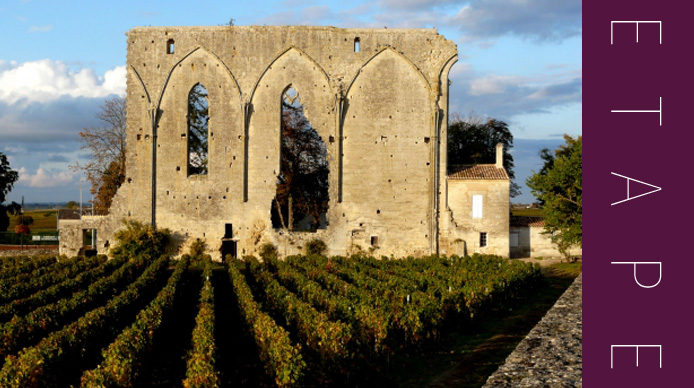 We can but encourage epicurean and aesthete tourists to stop at Saint-Emilion for it is a small medieval city so full of heritage and sweet nectars to discover. Over one thousand properties, many châteaux, 5000 hectares of vineyards and eight parishes make up the ancient Saint Emilion juridiction now protected under UNESCO world Heritage. In the eighth century, the poet and Roman consul, Ausone, owned vineyards at “Ascumbas” and praised its wine. It was around this time that the legend of Emilion emerged, a saint who gave the medieval city its current name and reputation, to which was added that of the Saint-Emilion appellation.

The Monolithic Church. To begin with, in the eighth century, a certain Emilion, Benedictine monk and hermit, decided to retreat into a cave at the mouth of a source in Ascumbas to meditate. For 17 years he baptizes and spreads the holy word; through his miracles and his kindness, his fame widens and pilgrims flock to him. It is here that a church was dug out of the rock where he abided and dedicated to Saint-Emilion in the eleventh century. Topped with a 133 metre high bell tower, the whole monolith is a rarity. Accounts by the holy monk, the oratory, the stone seat and the spring still exist. The medieval catacombs and the Trinity Chapel adjoin the church. Guided tours can be arranged through the Tourist Office in Saint Emilion. Tel.: +33 5 57 55 28 28.

The Cloister. The construction of the cloister of the collegiate church, first undertaken by the Saint Augustine canon community, began in the twelfth century and was only finished in the sixteenth century. The cloister reveals aspects of Perigord Roman architecture, yet the whole interior courtyard, comprising galleries covered in wooden framing, pointed arcades upheld by columns and capitals, is of Gothic style. At the door to the sacristy, a statue in wood polychrome representing Saint-Valery, the patron saint of wine makers – can be admired.

La Tour Du Roy.The tower, a stronghold keep, dominates the town. It was built in 1237 by order of King Henry III of England, Duke of Anjou. It is from the top of this tower that the Jurade of Saint Emilion unites on the third Sunday in June to proclaim the judgment passed on the New Wine and on the third Sunday in September to declare the start of the harvesting season. La Juradeis a famous brotherhood established by the King of England, John Lackland in 1199 and nowadays is the guarantor of the quality and reputation of Saint-Emilon wines throughout the world.

The Pottery Museum. A fascinating museum, which presents 20 centuries worth of Aquitaine pottery through a tour of underground galleries. The whole regional art history is unraveled from roman times and in chronological order. To balance things out, the present curator, Alain Querré, organises exhibitions of modern artists from the ceramic world, both known and unknown. 21 rue André Loiseau. Tel.: +33 5 57 24 60 93. www.saint-emilion-museepoterie.fr

Château Guadet. A vineyard in town. Guy Pétrus Lignac’s vines take root in the town. The vat is in the garden, the vines are enclosed. The estate, an inheritance from his paternal grandmother, the family of which is at the origin of the Château Pétrus, produces a Grand Cru Classé of which the 2007 vintage, Chateau Guadet has received praise from both specialists and wine critics alike. According to Andreas Larson, who was named best wine waiter in the world in 1988, this grand cru is ‘a Saint Emilion with a fine fresh nose of crushed berries with mineral hints with a long fruity finish’. www.chateau-guadet-saintemilion.com

La Maison du Vin. A visit to the Maison du Vin is the perfect introduction to the discovery of the Saint-Emilion wines. The Maison offers more than 250 vintages for tasting and for sale. Its mission is to encourage people to learn about and appreciate both the wines and the winemaking. It also hosts a an exhibition around the theme of “Seasons of the vines and wine” as well as a wine school for a private initiation to tasting. 1 place Pierre Meynard. Tel.: +33 5 57 55 50 55 www.maisonduvinsaintemilion.com

Hostellerie de Plaisance.A very ‘chic’ hotel in the heart of Saint Emilion. The view from the terrace is outstanding; overlooking the monolithic church. The interior design is by Alfredo Pinto, giving the classical backdrop a modern, more creative touch. Awarded the ‘best ouvrier in France’ commendation, the chef Philippe Etchebest‘s reputation is made. It is worth booking in advance if one wants to partake of his excellent cooking. Place du Clocher. Tel.: +33 5 57 55 07 55.

It is worth mentioning that the owners of this Relais and Château hotel, Chantal and Gérard Perse, also own a winemaking estate, the Château Montbousquet. Their guests can enjoy private visits and tasting sessions at the estate.

Le Château Grand Barrail. A spa hotel in the middle of vineyards, which is a member of the Small Leading Hotel association, and just a stone’s throw away from the town. The château, sits in three hectares of grounds and was built in the nineteenth century in the Flanders rococo style. The current owners added three modern buildings and a spa to satisfy their international clientele. The dining room of the Grand Barrail is decorated in Moorish style with oriental paintings, coloured stained glass and red marble columns. The rotunda room was built in the style of the Petit Trianon. It has been remarkably well restored and is a backdrop for feasts with the tasting of the very best wines. The Grand Barrail has put together inclusive packages with visits to the town, wine tasting sessions, visits of the estate and also organises various events linked to wine. Route de Libourne. Tel.: +33 5 57 55 37 00.

This is the place to go for all winemakers from Saint-Emilion and the surrounding area. The proprietor, Count François de Ligneris, makes this place what it is: warm, friendly with wholesome cooking, not to mention the wines! His presence is the real mainstay of the place. Late night diners in the garden often continue chatting into the small hours, enjoying excellent wines and philosophical and poetical conversations. It is the Saint-Emilion that inspires one! François de Ligneris also produces some good ‘vins de pays’, of which the Prince Sarment is one. 11 rue du Clocher. Tel.: +33 5 57 74 48. Next door, in his shop, one can find a selection of works and objects related to wine, all carefully chosen.

Marion and her husband, Abdou Maarfi, run this inn. A family home with several rooms and a restaurant, the terrace of which is surrounded with trellised wisteria – enchanting! The welcome is warm and the fare, rich and generous is accompanied by their very own Saint-Emilion Grand Cru Château La Mariotte, a simple fruity wine. A moment of happiness. 3 place du Marché au Bois. Tel.: +33 5 57 24 71 40 www.logis-de-la-cadene.com

Librairie des Colporteurs. A lovely bookshop stuffed full of old and rare books where one can hang around, to chat about literature or search for that rare or out-of-print book. 5 rue Thau. Tel.: +33 5 57 24 29 61

Les Macarons. A speciality since 1630. On the shop sign of the Maison Grandet one can read “Recipe of former nuns, widow Goudichaud Grandet, successor.” Then, one has to taste! Macaroons, which were traditionally served to accompany a glass of Saint-Emilion. Macaron Nadia Fermigier, successor of Mme Blanchet, 9 rue Guadet.