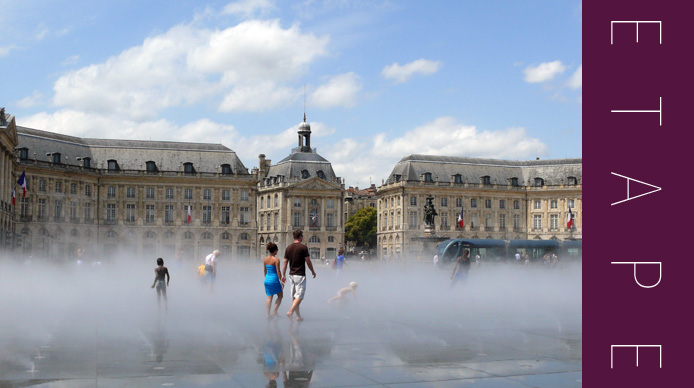 A Unesco World Heritage Site. Since 28 June 2007, for its value and unique heritage. Capital of the Gironde region, it is an architectural gem dating from the eighteenth century that has known how to seamlessly integrate nineteenth century additions that were essential in modernising the city.

The river takes pride of place at the heart of the city, the left bank linking up with the right bank. The redevelopment of old warehouses has brought living and celebration spaces back on the Garonne’s embankment. The city moves by Tramway.

The Chartrons quarter is a good induction into understanding how the trade of wines, and those from Bordeaux and the Médoc in particular, evolved. It is the historical core of the wine trade in the eighteenth century. The old warehouses that gave onto the Gironde’s embankments are transformed into spacious middle-class lofts and the houses are restored. The residences have kept their beautiful facades with street entrances and overlooking the river at the back. They are in high demand from a whole new generation of bohemian Bordelais. Lofts, design shops, cafés.. some very trendy addresses. (The Bordeaux Tourism Board organises guided tours)

The Antiques quarter, around the Market Square, on the rue Notre Dame and around the Saint Louis des Chartrons Church.

Chartrons’ Museum of wine and trading, a 1920s building with vaulted cellars housing worshipful bottles of Bordeaux, some of which dating back to the sixteenth century. A beautiful preserve of the history of the wines of Bordeaux, 41 rue Borie. Tel.: +33 (0)5 56 90 19 13.

Bordeaux’ Medici villa, Bernard Magrez, owner of 37 wine-growing estates, including the famous Château Pape Clément, throws himself into artistic philanthropy. The townhouse that bears his name is due to become a centre for Contemporary Art and will offer accommodation to young artists. Worth keeping an eye out for.

The CAPC Museum of Contemporary Art is set in what used to be the warehouses for Réels’ colonial goods in the nineteenth century. It holds over 600 works of art from the 70s and 80s and is also forming the next generation of artists, 7 rue Ferrère. Tel.: +33 (0)556 00 81 50.

One day to spend outside Bordeaux ? Which wine region  would you go for? Click here for some advices.

La Maison Fredon
The Fredon House is the house that compliments the five restaurants and bars located around the Rue Porte de la Monnaie, all properties of Jean-Pierre Xiradakis. Coincidentally, the original owners in 1750 were also a family of merchants very involved in the life of their neighborhood. Therefore the building is soaked up by it’s history; Bordeaux style and spirit of the 18th century. Ask the restaurant, just facing the hotel, for the room key and make yourself at home in one of the five bedrooms of unusual character including a chimney and French ceilings. The bedroom in the attic encompasses a view of the Garonne River. Philippe Stark invites all with stylish furniture and canvasses of masters that are all for sale! You could take them to your house where they will flourish!
6, rue Porte de la monnaie
Tel. : + 335 56 91 56 37

Le Petit Commerce
Located in front of their fish market, “Le Petit Commerce” is simple and welcoming, but here we sell only fresh fish of any kind: turbot, sole, oysters, sea scallops …. The clients and the regulars come and come again to taste the special of the day among friends and the newly discovered white Bordeaux wine. We enjoy it and we will return!
22, rue du Parlement Saint Pierre
Tel. : +33 5 56 79 76 58

Jean-Pierre Xiradakis’ La Tupina, is one of those ‘must’ addresses in Bordeaux and where one goes to rejoice on the generous cuisine traditionally prepared on coals. Typical old-fashioned dishes, such as Bègles cod recipe, Pauillac lamb, are to be savoured in a warm atmosphere, rubbing shoulders with the great and the good in the wine industry, critics and sommeliers. 6 rue Porte de la Monnaie. Tel.: +33 (0)5 56 91 56 37

A little further up the street, you’ll find four of La Tupina’s sister establishments: the delicatessen “Au Comestible” for a chic yet simple snack, “La Kusina” for an affordably priced daily menu with fish, vegetables and fruit, the “Bar Cave” and at the corner, facing the Garonne river, the “Café Tupina”www.latupina.com

The Mollat bookstore is a real institution and the largest bookshop in France with the greatest collection of books dedicated to wine, 15 rue Vital Carles. Tel.: +33 (0)5 56 56 40 40.