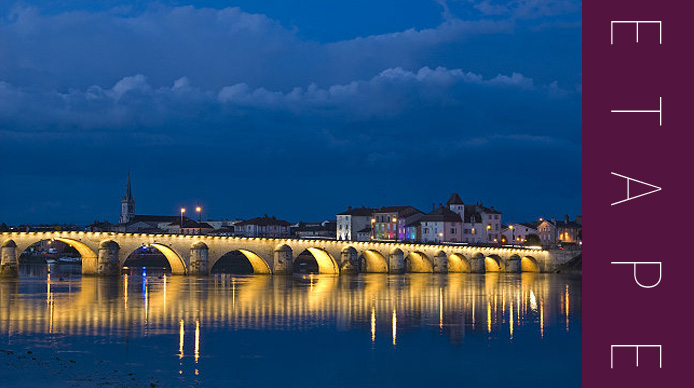 Civilisations and trade can be traced back to the old “Matisco” in the second century BC. Roman, then Gaulois, between 843 and 1600, Mâcon, bordered the Holy German Empire and the Kingdom of France and became a strategic crossroad.

Saint Laurent’s Bridge. Starting out as a small ford, then turned into a wooden bridge built by the Roman Legion, it became a stone bridge with six arches in the eleventh century. One had to pay a toll to cross it. A witness to the religious wars, the bridge was used by the then town governor, William of Saint Pont, to shove the Huguenots over board into the river. This bridge was spared during the Second World War. Today it is made up of 12 arches, lit up at night, and remains the symbol of crossing the Saône from one bank to the other.

The Ursulines Museum. The former nunnery has become a huge and rich museum. The history of Mâcon’s urbanism, an extensive topic, is gathered in the regional archaeological and pre-historic collections. One room is dedicated to seventeenth century pottery, another to traditional Mâcon methods of winemaking. Most riveting, through this panoramic account of ancient art and history, is the fact that every taste is in fact catered for, as the Museum also houses post impressionist, pointillist, post cubist and up to Pop Art paintings and works of art. 5 rue des Ursulines. Tel.: +33 3 85 39 90 38.

The Lamartine Museum.  Souvenirs and memoirs of Alphonse de Lamartine, the town’s ‘own boy’, have found their way to the second floor of the thirteenth century town house. The life and works of the poet are documented here. 41, rue Sigorgne. Further information at the Tourist Office: Tel.: +33 3 85 39 90 38

Saint Peter’s Church. Built in the nineteenth century by the architect Berthier, who was a pupil of Viollet-le-duc, this church has a three tiered Roman frontispiece, dominated by two bell towers and topped with a stone spire of extraordinary elegance.

La Maison de Bois. Place aux Herbes. The oldest house in Mâcon. Built between 1490 and 1510, its façade is all in wood and decorated with the most hideous statuettes, which the passers-by just love!

La Poularde. A few kilometres from Mâcon at La Chapelle de Guinchay. Don’t hesitate to drop in here to delight your palate. The room is ‘in tone with the place’ but the walls are covered in paintings by such artists as Robert Combas, Hervé de Rosa and Evaristo. And believe me, the pigeon on hay, twice cooked, or the Mieral poultry are just excellent. Olivier Muguet’s modesty matches the level of his talent. Oliver has one star on his apron, which is truly well deserved. Tel.: +33 3 85 36 72 41