The Saône runs through Chalon 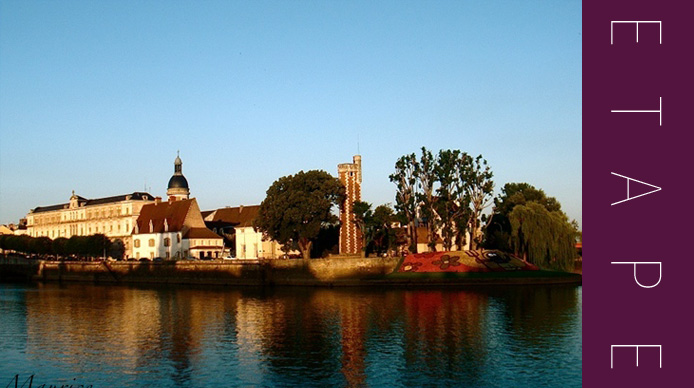 The cathedral city. With origins rooted in Antiquity, it was developed around Saint Vincent’s cathedral and the Châtelet – a fortified sixth century palace acquired by Hugues II, Duke of Burgundy. Chalon-sur-Saône was awarded the title of Art and History Town in 1994.
Saint Vincent’s cathedral. A national heritage building, the façade of which was rebuilt in the nineteenth century, in neo-gothic style.
The cloister. Disbanded into several properties during the eighteenth century, it was reformed according to the original plans, thanks to the efforts of Abbot Mugir, a country pastor, who was erudite and a socialite, renowned for his writings published in the nineteenth century.
The Colombière Chapel. It is the work of a famous architect, Auguste Perret, who restored the town of Saint-Nazaire after the last war.

At the crossroads of the Grande Rue, the rue Saint-George and rue aux Fèvres, one can admire the beautiful buildings left behind by the wealthy and tasteful middle classes from the seventeenth and eighteenth centuries.

The Nicéphore Niepce Museum. The inventor of Photography was born in Chalon in 1765. The museum is dedicated to him and holds some three million photos made from original plates up to the latest techniques. The photo library has gathered an incredible collection of work taken by the world’s top photographers. 23, Quai des Messageries. Tel.: +33 3 85 48 41 98. www.museeniepce.com

Le Musée Vivant Denon. This great artist and Egyptologist, who took part in the Egyptian campaign alongside Bonaparte, was born in Chalon in 1747. Denon was appointed head of French museums and the Louvre, where he has a room named after him. In the Chalon museum, the archaeology room is dedicated to gallo-roman civilization. The Denon room is full of Egyptology and dedicated to artistic creation from the sixteenth to the nineteenth centuries. Place de l’Hôtel de Ville. Chalon-sur-Saône Tourist Office. Tel.: +33 3 85 94 74 41.

Le Restaurant de la Maison des Vins. After visiting the Maison des Vins, don’t hesitate to climb the stairs and discover, on the first floor, the beautiful restaurant hall and terrace overlooking the Saône River. Superb view and excellent fare made from local produce. Poached eggs and the cheese platter with Epoisses, Cîteaux, or Mont d’Or to name but a few, are highly recommended. 2 Promenade Sainte Marie. www.restaurant-la-maison-des-vins.fr. Tel.: +33 3 85 41 66 66.