AUXERRE. Enclosed vineyards within the town 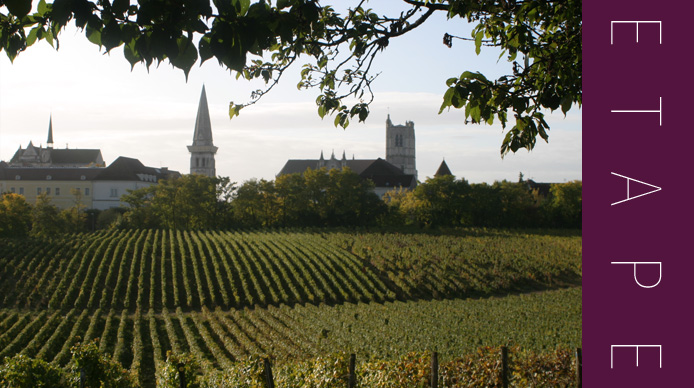 From the petit césar to the great Chardonnay

Chablis wine has been exported to England and Flanders. The wines were renowned for their freshness.
The Chablis appellation is bordered by the slopes of the hills along the Serein river, 20 km in width and 15 km in length. It covers 19 parishes of the Chablis region and is the largest white wine Burgundy vineyard, getting up to around 5000 hectares. Only Chardonnay vine plants are used here, and four levels of appellation stipulated according to the soil and position: the Petit Chablis is grown on the hilltops, producing a fresh, dainty wine, to be drunk young; the Chablis first growth, of which the most famous are Mont de Milieu, Montée de Tonnerre, Fourchaume and Montmains; the Chablis Grand Cru such as Blanchot, Les Clos, Valmur, Grenouilles, Vaudésire, Prieuses and Bougros. Great wines with a gold green robe, and mineral and refined bouquet, which need to be put down for several years. In the region of the Yonne such endemic vine plants with names like César or Irancy, Melon de Bourgogne and L’auxerrois or Vézelay are to be found. In Saint-Bris le Vineux, the Sauvignon produces an excellent Saint Bris appellation.

“Aucerre” wines, famous in the Middle-Ages, cover around 1500 hectares of vines on the hills to the south of Auxerre. They produce a wide range of appellations of which the Saint Bris is the most recent. The Irancy is a red wine from pinot noir grapes, to which some césar might be added, a variety introduced by the Romans, which is said to be at the origin of Auxerre wines.

The Burgundy Côtes-d’Auxerre, which can be found in red, white and rosé comes from pinot noir and chardonnay grapes. The Burgundy-Chitry, red and white, is produced on its parish of origin. The Burgundy-Coulanges is mainly made up of red wine. Last but not least come the Burgundies: Bourgogne aligoté and passetoutgrain and Burgundy–grand ordinaire, without forgetting the crémant de Bourgogne.

The presence of vines at Vezelay dates back to gallo-Roman times, yet it was not until 1996 that the AOC Bourgogne Vézelay appellation be confirmed. It covers 60 odd hectares headed by the majestic chardonnay, of which there are four producing parishes – Asquins, Saint-Père, Tharoiseau and Vézelay.

The Agrippa road once ran through the town of Auxerre in the first century, a road that used to cross Gaul from south to north. Set on the Yonne river bank, Auxerre was an important crossroads very early on due to its land and water position. The inhabitants of Auxerre became wealthy by transporting goods along the river, cultivating their vines and floating logs up river towards Paris and beyond. Towards the third century, Auxerrre became fortified to defend itself from barbaric invasions, then displayed its Christianity by constructing the cathedral between 418 and 448 in honour of the Bishop Saint Germain. On her way from Vaucouleurs, Joan of Arc stopped at the cathedral for mass. On the presbytery wall a commemorative plaque can be seen, as well as her statue and a stained glass window erected in memory of her visit.

“On the path of Cadet Roussel”. Bronze arrows nailed to the ground lay out an educational path to follow around the town and waterfront indicating over 60 different places of interest. Cadet Roussel, whose real name was Guillaume Joseph Roussel, an eccentric person, born in Auxerre in the eighteenth century, owes his fame to a humoristic song, written by Chenu de Souchet and sang by the soldiers during the Revolution. Another famous figure of this town in the twentieth century was Marie Noel, a famous poet. Much loved by the inhabitants of Auxerre, her statue near the Clock Tower, shows her wearing her handbag, umbrella and hat.

Saint-Etienne Cathedral. A magnificent gothic cathedral, a jewel in the midst of the town. Some of the best stained glass windows in France are to be seen in the choir section and the transept. The eleventh century crypt portrays extremely rare mural paintings of Christ on the cross.

Saint-Germain Abbey. Chapter House, store room, cloisters, the Saint Germain Abbey is a monastic complex built between the ninth and eighteenth centuries and its remarkable ninth century crypt is covered in mural paintings which are the oldest known today. Tel.: +33 3 86 18 02 90

Saint-Peter-in-the-Valley Church. The winemakers of the Saint Peter’s quarter financed the sixteenth century tower and the seventeenth century church. The façade is richly decorated with sculptures showing scenes depicting vine themes, Noah’s intoxication from the Bible and of Ceres, the goddess of abundance. 1 rue Joubert.

This enclosed vineyard is the surviving one in Auxerre, an urban vineyard dating back to the Middle Ages. It was mentioned in the will of the Bishop Saint Vigile in the seventh century as being part of the Abbey of Saint-Germain’s estate, this vineyard is part and parcel of the town’s identity and is an important part of local heritage, the listing of which has helped in its conservation. This domain over five to eight hectares, of which four are classified AOC Bourgogne, belongs to the Hospital nowadays. Tel.: + 33 3 86 94 38 00

La Salamandre. Serge Colas’ restaurant has become over the years the most sought out place to eat fish, seafood and shell fish. Sole, turbot, john dory… the list of wild fish and line caught fish is amazing. ‘When only the best will do and all is delivered fresh daily” emphasises Serge Colas. Together with his wife, Catherine, he has created a cosy atmosphere in a bright and cheerful dining hall and customers just love to come here to make a change from the traditional Burgundy fare of Beef bourguignon and snails. One can still eat scallops and lobster pie, pan fried foie gras, lentil and calf’s head in sauce. 84 rue de Paris. Tel.: +33 3 86 52 87 87.

Le Jardin Gourmand. Pierre Boussereau and Olivier Laplaine’s restaurant, installed in a large town house, is dedicated to gourmet fare and the pleasure of the senses. Fine Burgundy wines accompany the pasture raised Morvan beef, flowers and fruit from the vegetable garden and local cheeses. The dishes are prepared artistically with flavours from here and subtle perfumes from elsewhere. Perfectly controlled blends with a touch of creativity resulting in a joyous experience for the palate. 56 boulevard Vauban. Tel.: +33 3 86 51 53 52