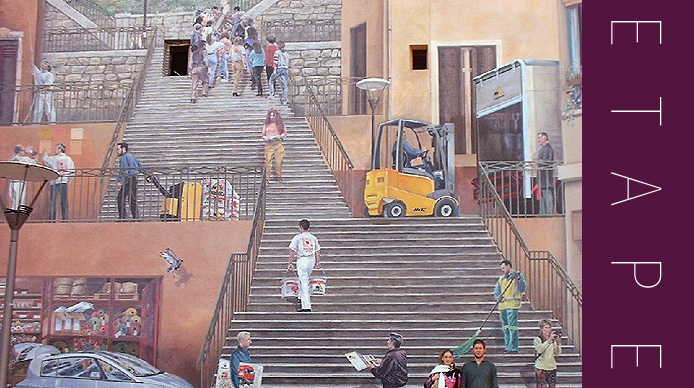 Nestled between Beaujolais and Côte du Rhône, the city of Lyon is the link between these two vineyards.

Lyon, located at the crossroads of major Western routes, intersecting the Rhône and the Saone rivers, had become the Royal Avenue for the Roman legions.
During the first century BC, the legate Miniatus Plancus chose “Corbeaux Hill” which later was named Fourvière, to establish the city of Lugdunum, a resort for veterans of Caesar’s army.

Birthplace of Christianity, capital of the three Gauls, ecclesiastical city, capital of gastronomy, from century to century, the pathway of the city is prestigious. The early Christians found refuge in the crypt of the church of St. Irenaeus, in Fourvière, Lyon keeps the remembrance of Saint Blandina’s martyrdom.During the Middle Age, and since the ninth century, Lyon has become the seat of the Primate of the Gauls .The Saint John cathedral of Roman Gothic style hosted the marriage of Henry IV with Marie de Medicis. The city lived its most glorious days during the Renaissance. In this city, hosting fairs and commerce of silk and printing, rich houses and Renaissance style hotels filled the old Lyon neighborhood. During the nineteenth century, Lyon became the city of cinematography with the discovery of the Lumière brothers. Today, being a UNESCO World Heritage site carried by the emblematic figure of Chef Paul Bocuse, Lyon is named capital of gastronomy.

According to the work of Jean Deniau titled “grape and wine in Lyon in the fifteenth century,” the slopes of the Croix Rousse and Fourvière were covered with vineyards. Then, the vines were torn by religious communities to build convents.

Districts and Crus in Beaujolais. Each district of Lyon is associated with a Beaujolais Cru, thus the first district represents the Chenas, the 6th represents Morgon, and Saint-Amour as 9th. The month of October witnesses Lyon’s annual celebration of each Beaujolais Cru throughout its nine districts.

Fourvière District. On the hill you will find the remains of Lugdunum with the Museum of Gallo-Roman Civilization, the ancient theater, the Roman baths and the crypt of the first Christian martyrs of the Church St. Irenaeus.

Atelier Tissage Godart. The last weaving workshop of Croix Rousse was saved thanks to the association Soierie Vivante. Tel.: 04 78 27 17 13, www.soierie-vivante.asso.fr

Vieux Lyon District. Under National Heritage protection since 1999, the Vieux Lyon has offered a path adorned with beautiful houses and Renaissance hotels alongside the houses of Laurencin, Thomassin, Claude Debarg, Dugas and Tour Rose…

La Croix Rousse district. Located on a hill, it was the stronghold of the silk trades and workshops and the territory of silk workers called Canuts.

Les Murs Peints (The Painted Walls). An outdoor museum that portrays the history of the city, an urban and artistic route composed with fifteen steps to admire the painted walls. Works by artists of Cité Creationwww.citecreation.fr

Halle Tony Garnier. Architect Tony Garnier has created many landmarks renewing the urban landscape of the city: the “Cité des Etats-Unis”, the Gerland stadium and the Halle for theater and exhibitions. 4 rue des Serpollières. www.museeurbaintonygarnier.com

The Institut Lumière. “Workers Leaving the Lumière Factory”, a movie screened in 1895, was released in many parts of the world. Auguste and Louis Lumière had just invented the cinematograph. The warehouse displayed in the movie was renovated into a movie theatre to project rarities, much to the delight of moviegoers. 24 rue du Premier Film. Tel.: 04 78 78 18 95 www.institut-lumiere.org

Le Musée Gadagne. In Vieux Lyon, a magnificent heritage building of the Renaissance hosts the Museum of Lyon History and the Puppet Museum which is another attraction of the city. 14 rue Gadagne. Tel.: 04 78 42 03 61

The Festival of Lights. From 8th to 12th of December, 2012, monuments, rivers and hills of Lyon are decorated with lights, a tradition that has existed since December 8, 1852. On that evening, people in Lyon put candles in their windows to celebrate the statue of Virgin Mary being placed on the hill of Fourvière. Urging to be considered one of the most beautiful cities in the world, each year, Lyon revels in boldness and creativity. www.fetesdeslumières.lyon.fr

With the iconic figure of Paul Bocuse, Lyon is considered the world capital of gastronomy. There are many choices available with the cuisine of the award winning chefs and the cuisine of “Mère lyonnaise” and Bouchons

Les Halles Paul Bocuse. Since 1971, the vast covered market is the meeting point for the inhabitants of the city. In Lyon, everything is good but, this is the place to find best quality products: Mère Richard cheeses, Gast Butchery, Rousseau fish, meat from Maurice Trolliet … Your eyes will devour and taste, then you can have lunch under the covered market at Leon, “Garçon Bouchers” or you can enjoy wonderful oysters at Georges Célerier. 102 Cours Lafayette.

M Restaurant. This one-Michelin-star restaurant is owned and managed by Mathieu Viannay. It proposes classic cuisine but offers great interpretations. From fricassee of abalone with pine kernel to artichoke with foie gras, the blend of taste and cooking is perfect. 47 avenue Foch. Tel.: 04 78 89 55 19

Nicolas Le Bec. This 2–Michelin star chef doesn’t act like a star. Nicolas has been experiencing many culinary cultures, his cuisine has no borders. The blend of ginger, cilantro and other mild spices with fresh products from Lyon is as surprising as seducing, a true pleasure for the taste buds. 14 rue Grolée.Tel.: 04 78 42 15 00 www.nicolaslebec.com

Bouchons. During the nineteenth century, Bourgeois houses cookers started their own businesses and opened their canteens offering simple, good and cheap food. This “Mother’s Cuisine” is the soul of Mère Brazier’s restaurant. Later on, this place has been named “Bouchon.” For lunch and dinner, Bouchon serves “Mâchon”, a canuts’ favorite heavy morning snack. Local cheese “Cervelle de canut”, “Cardon” cooked with bone marrow, dumplings, tripes, salads and sausages of Lyon are all invigorating dishes produced with local ingredients and accompanied by local wines.

La Mère Brazier. Famous Mère Brazier was the mentor of Paul Bocuse, who bought the restaurant in 2008. Mère Brazier passed away but Paul kept the soul of the place intact and still uses Bouchon recipes. 12 rue Royale. Tel.: 04 78 23 17 20

Le Café des Fédérations. The Café has a vintage ambiance with checkered tablecloths and dry sausages on top of the bar. The “tablier de sapeur”, calf’s head or ‘gras-double’ come freshly cooked in your plate… delicious! Bertrand Tavernier has shot some of the famous scenes of his movie The Clockmaker of Saint Paul. 10 rue Major Martin. Tel.: 04 78 28 26 00 www.lesfedeslyon.com

Au Petit Bouchon. At George’s restaurant everything is good! With his cozy rooms and nice service, the place meets all the criteria of a real Bouchon: conviviality, authenticity and simplicity. 6 rue du Garet. Tel.: 04 78 28 30 46