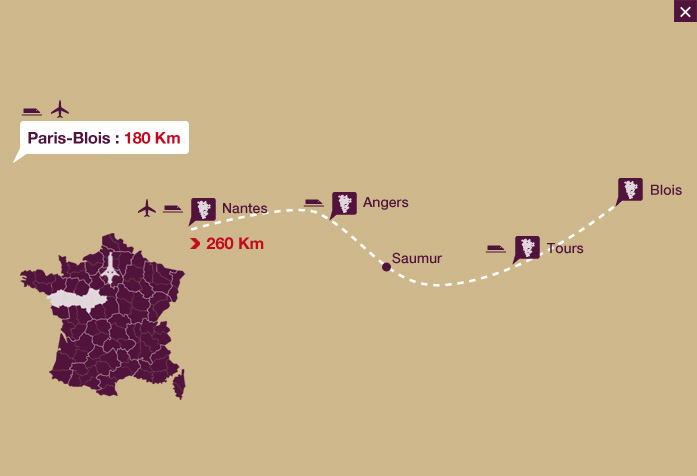 Guaranteed vintages and a strong link to the River are at the forefront when looking at wines of the Loire Valley. 68 AOC vintages spread over 43,000 hectares, over 4,000 vine growers and the imprint of a grand river, the Loire, which gives the wines its tonality, softness and mineral richness. The Loire Valley is France’s third-ranking region for guaranteed vintages. The River has a majestic bearing and 280 km of its banks, between Sully-sur-Loire and Chalones, are classified UNESCO World Heritage. It is the longest Vineyard route in France, 800 km running along the Loire and away towards the banks of the Cher, the Loiret and the Vilaine, other rivers that water it, ending its journey at the Atlantic Ocean.

From Blois to Nantes, the Val de Loire to the Loire-Atlantique, going through Anjou and Saumur, this very rich promenade through the vineyards, with its exceptional historical and architectural heritage, is to be savoured with a thousand bacchanalian flavours.

The Royal Road, more royal than anywhere else!
Vineyards from the Loire Valley blend in with History, the history of France and its great Kings from Charles VII to the eighteenth century! You’ll revisit the times of the Valois, the Plantagenêt, the Capétiens, the English, the duchy of Brittany, the Vendean wars, Henri IV, the Dukes of Berry and François I. The History of the reigns and regencies of the French Queens and Royal Princesses, Blanche de Castille, Catherine de Medicis, Diane de Poitiers, Claude de France…

The banks of the Loire were dressed with powerful fortifications in the Middle-Ages and elegant Châteaux during the Renaissance and both Kings and Lords would favour the planting of vineyards and the trade of wine.

The vine, from the Bishop to His Majesty.
In the fourth century, Saint Martin, the first Bishop of Tours brought, from his native Hungary, a stem of chenin, which, as it spread in the religious cloisters of the Middle-Ages, brought happiness to the Kings of France. In the twelfth century, Henri II Plantagenêt served wine for the Anjou at court. The wine was also King René d’Anjou’s favourite, as well as that of Philippe Auguste, Louis VI and Louis XV.

In the parish of St Avertin, Louis XI’s “vin gris”, a blend of three noble pinots, black, grey and meunier, has been brought back to fashion at the Château de Plessis les Tours.
In 1422, Charles II, like Jeanne d’Arc, has a preference for the wines of the Touraine and the Anjou, of which he’d drink large pints before going into battle. François I, who had a particular liking for Vouvray wine, introduced a vine from Bourgogne and had it planted at Romorantin in 1519 and gave it the eponymous name of his good town. In his novel Eugénie Grandet, Honoré de Balzac stated that “it was the Dutch who set the price of wine”.

The Dutch had a particular liking for “white and clairets” wines. A wine they would rework to their taste. As early as the thirteenth century, casks would leave the port of Nantes for Flanders and into their empires, thus maintaining their fortune and their commercial and maritime power. The story goes that King Edward IV of England drowned his brother and rival Clarence in a barrel of his cherished Malvoisie to ensure him a softer death.

A wine for pleasure.
From Rabelais to Ronsard through to Bellay, poets and writers have lauded the “divine bottle”, the “sweetness from Anjou”. It was Leonardo da Vinci’s last land and the first for the patron princes where the power of religion and that of monarchs would mix. Rabelais liked the pinot from Aunis, “the large Véronais”. The grape variety melon de Boourgogne which blooms in the vineyards around Nantes for the muscadets and large plants, was very successful at the time of the outdoor cafés and lunches on the grass and remains to this day a holiday wine. Another one that stands out is the vintage of Chaume, from the hillsides of Jasnières, a precious wine, and according to Curnonsky “the best white wine in the world”.

In 1834, Ackerman utilised the champagnization method in the Saumur region and introduced it to the Tuveau cellar for fermentation. A vine originating from the Aunis Priory in the Anjou region was planted on the request of King Henri III in the thirteenth century. It covered 80% of the Loire’s banks but almost completely disappeared in the sixteenth century, as the English preferred the cabernet from the Bordeaux region over it. “Panurge drank like a Breton”. In 1055, the Count of Anjou had a vine plant from the Bordeaux region planted at the Abbey of Ronceray in Angers. Rabelais referred to it as Breton since it came from Nantes and spread from Saumur to Montsoreau. A pleasured land and heritage in a region, which has always known how to cultivate the art of living and the cultivation of wine.

Small tales and great names
The poets and writers Rabelais, Ronsard, Joachim du Bellay, Alfred de Vigny and Honoré de Balzac are all from the region and Leonardo da Vinci spent his last years at the Clos Lucé in Amboise.

In the nineteenth century, King Edward VII of England and Georges Clémenceau were friends with famed wine grower Father Crystal at Parnay in the Anjou region. Closer to our time, Emile Delahaye, the car manufacturer, was born in Tours in 1843. The architect Victor Laloux was behind the designs for the station, the town hall and the basilica Saint Martin in Tours. The house of the artist Max Ernst is located in the parish of Huismes and Calder’s workshop in Saché. Coco Chanel was born in Saumur. The singer Mick Jagger owned the Château de Fourchette in Pocé sur Lisse. The English actor Jude Law comes to relax incognito in a residence near Montreuil Belay. The Minister Roseline Bachelot comes from Angers and Agnès Varda from Nantes. The writer and journalist Alix de Saint André lauds Saumur and Le Thouet. The actor Gérard Depardieu owns a vineyard at the Château de Tigne.

The twelfth and fourteenth century Château du Plessis Macé was the setting for the filming of Fanfan la Tulipe with Gérard Philippe and Gina Lollobrigida and also Le Bossu with Jean Marais.

The Château de Brissac was the backdrop to the film Peau d’Ane with Catherine Deneuve. Some of the scenes from Bertrand Tavernier’s film La Princesse de Montpensier were filmed in the courtyard and on the square of the Château Royal in Blois. Its États Généraux room was the setting for the interiors scenes for Luc Besson’s film Jeanne d’Arc and it is in Nantes that the travelling sequence of Jacques Demy’s film Lola with the actress Anouk Aimé was filmed.