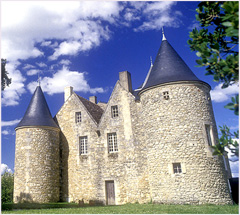 The château Mendoce, built in 1636 for Jean de Ridder, a trader in Dutch wines, is better known as the château “Mille Secousses”, a royal moniker! When the château was honoured by the visit of a young Louis XIV, accompanied by Mazarin and his mother Anne of Austria, the road was so coarse that the future Sun King was shaken a thousand times and complained about it. The château has a fetching look to it, with its corner towers pierced with embrasures and topped with watch turrets. Its Bordeaux Supérieur offers a thousand gustative pleasures. The current owner Philippe Darriccarère, a pharmacist who pawned his shop for vines, will be delighted to take you round his castle and share with you his passion for wine. Visits and tastings by appointment. www.mille-secousses.com