Vineyards, Chapels & Climates in all forms… 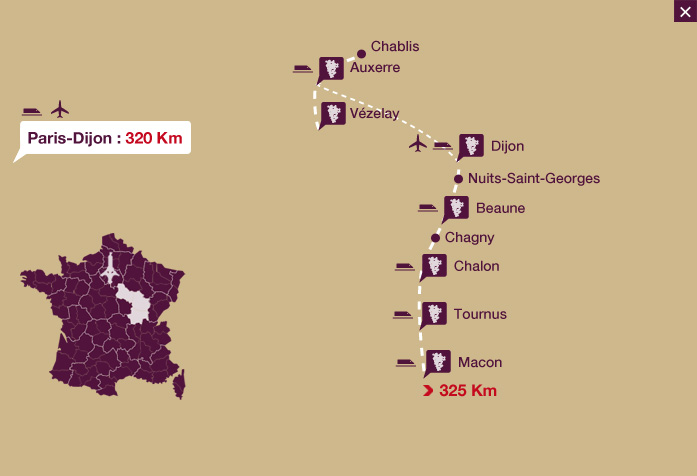 The Climate of the Burgundy vineyards are a unique cultural site claiming the inclusion of this exceptional inheritance on the World Heritage List of UNESCO.

Specific to Burgundy, the term “climate” is not related to meteorology, but means a parcel of land dedicated to vines, precisely defined and known by the same name for centuries. The location, soil, subsoil, exposure, microclimate & history determine the characteristics, the unique personality of a land and a vintage. The “climate” form a mosaic of prioritized & world-renowned wines.

Villages, Premier Crus, Grand Crus of Côte de Beaune and Côtes de Nuits … awaken in everyone’s mind, here or elsewhere, the wonderful & voluptuous taste of wines like Meursault, Corton-Charlemagne, Romanée-Conti, Pommard …
Sloping vineyards, the combined work of man and nature has created a culture whose success is considered as a world model, the reference of terroir viticulture. A true heritage. www.climate-bourgogne.com

In the year 542, Childebert the first, Clovis’s son, brought the relics of Saint Vincent back to France and laid them in Mâcon and Chalons in viticulturist Burgundy. Saint Vincent hence became the patron saint of winemakers. His feast day is celebrated every year on 22nd January. Ever since, the relationship between church and winemaking in the region has been intensely close. A tale, which is also linked to the rivalry between the Dukes of Burgundy and the French crown. Indeed, under Saint Louis’s reign, Mâcon and its region was under the authority of the French crown, whereas the rest of Burgundy was under the jurisdiction of the Dukes. It was in 910 that William, Duke of Aquitaine, founded Cluny Abbey, home to a community of Benedictines owning numerous vineyards in the region and beyond. Right from the start, Cluny Abbey counted wine and local produce into its income and their wine making property is abundant. Monks play an essential role in the development of viticulture: wine for Mass, but also wine for medicinal purposes, wine for entertaining and to honour distinguished guests.
The Clos Saint-Pierre, near Mâcon, belonging to the Mommessin family, was a former outlying building of Cluny Abbey.

Land and as many stories

A chalky clay ground with a mosaic of diversified combinations of soils. Enclosed within dry stone walls, the vineyards are part and parcel of the scenery. They roll, alternate with pastures for charolais cows and sometimes reach right to the top of hillsides, sitting at 400 metres. Off the beaten track, the countryside is dotted with villages, châteaux, Clunisian chapels and beautiful dwellings. More than anywhere else, the pleasure of bucolic and cultural tourism is combined with the discovery of vineyards and the tasting of fine wines.
Parcelled up plots that run out of and around villages, parishes lending their name to vintages.

Mono-varietal vines: Chardonnay and Pinot Noir vines, a pinot noir with a white juice as all the colour is in the skin, reign supreme over the territory of South Bourgogne, where white wine is in monopoly. The red Mâcon, however, is produced from a Gamay vine. The only blend allowed for the Passetoutgrain Burgundy: a red from Pinot Noir and Gamay grapes.
The Aligoté, this poor vine from Burgundy, sits well on the hilltops. This white wine is nicknamed “flint” and is perfect as a kir with crème de cassis.

It is not easy to organize a wine tour by yourself in this region as the wine producers don’t easily open their doors. You should be assisted by WineTravelinFrance, the travel specialist in high end wine tours in Burgundy.